The refusal of some factory owners to pay the traditional Eid bonuses has resulted in factory workers at two major garment factories to go on strike and block two highways (in what is becoming a standard tactic of the garment workers).  The factory owners at Zirani (one of the factories) have reported that they will now pay bonuses.  At Monno Attire Ltd. on the other hand, workers went out on strike over being forced to work for 24 straight hours without a break so that the bosses could fill orders on time.  (It’s also problem since many of the workers are fasting for Ramadan and are forced to eat the low-quality food that bosses provide).  Owners of that factory were also forced to make concessions as soon as the strike occurred. 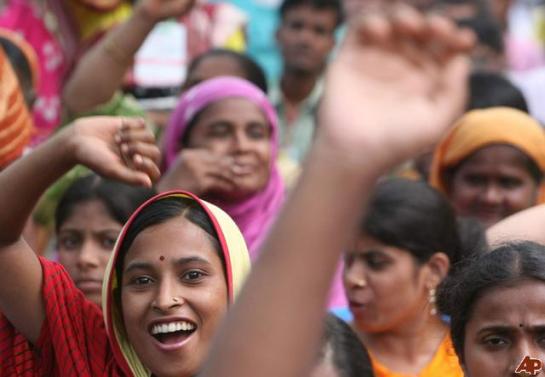 The Financial Express of Bangladesh, at least, thinks that this may be the beginning of a new wave of combativity in the garment districts near Dhaka:

The fresh wave of protests in Manikganj and Gazipur signals the recurrence of violent unrest in the apparel industry ahead of Eid.

Police said thousands of workers of two garment factories in Manikganj and Gazipur blockaded Dhaka-Aricha and Dhaka-Tangail highways as authorities of the units are yet to settle workers’ wages, dues and bonuses.

What seems to be at the heart of this new round of protests is the breakdown (tacit or organized) of relations between the bosses federations (BGMEA and BKMEA) and individual factory owners.  While the federations are at least publicly mouthing support for paying bonuses on time, individual owners have been reluctant to comply (one feels a need to turn this into an object lesson about what Marx called capitalists: “a band of hostile brothers”).  And so workers are forced to take matters into their own hands and win some concessions.  Labor groups have been warning for some time that the bosses would renege on promises to pay bonuses and wages on time.  Should the practice of reneging continue, it will spark some fightback from the workers:

“We will gherao the houses of apparel manufacturers if they fail to provide workers with the dues, bonuses and overtime bill by tomorrow,” federation president Abul Hossain said.

“We don’t want any violence. We just want workers’ legitimate demand to be met within the deadline. Otherwise the consequences will not be good for the owners,” he added.

Also, Bangladesh is coming under some pressure internationally to improve the conditions for garment workers.  Aside from celebrities visiting the garment district, several major multinational garment importers (like the American Apparel and Footwear Importers Association) have called on Bangladesh to resolve the conflict by paying better wages and improving working conditions for garment workers.  Undoubtedly the split between importers and exporters on the issue is because importers have to deal with PR issues but none of the shop floor issues.

The Global Post did a moving piece on the lives of women garment workers that is definitely worth taking a look at:

2 thoughts on “Bangladeshi garment workers — up from the ashes”