The wikileaks report has become something of a problem for the Pakistani military and intelligence, since one of the main things it points out is the extensive connections that exist between the ISI and the Taliban. This was always an open secret, but it now seems to mean that the rift between the civilian bureaucracy (which wants to do whatever the US wants) and the military (which has a long-term objective about “strategic depth”) will become wider and deeper. The Pakistani government was forced to extend General Kayani’s tenure another three years, something it did not want to do, which seems to indicate that the balance of power is definitely tilted in that direction. It’s also pretty amusing to watch the civilian bureaucracy scramble to keep up its PR game; the American establishment, too.

What’s still unclear is whether this rift will persist uneasily and why the US allows Pakistan to have it both ways (helping the Taliban and attacking them). There may be a difference of opinion in the US, too: the White House tried to sound tough on Pakistan, while the American Armed Forces Service had generous things to say. At a minimum it suggests that the US does not have a strategy for Afghanistan independent of Pakistan and that it is not in any position to force Pakistan’s hand. It especially needs Pakistan for the land routes which are used to replenish NATO supplies. The argument that was used last year (that Pakistan goes after the TeT and not the Afghan Taliban) seems to have been eliminated from the establishment speak as are threats of unilateral strikes along the Durrand Line.

But it does seem to be pretty straightforward that American designs on Afghanistan (permanent power projection in Asia) are at odds with Pakistani designs on Afghanistan (reliable regional ally and “strategic depth” in the event of a war with India) and that at the end of the day, Pakistan is forced to hedge its bets. Pakistan cannot be compelled to give up its reliance on the Taliban without a complete reorganization of Asian geopolitics and that means the nearly impossible combination of a defanged India and an isolationist America. Here’s how David P Goldman puts it:

“The government’s desultory campaign against pro-Taliban elements on the Afghan border comes down to Punjabis killing Pashtuns. To drive the Taliban in earnest out of the Pashto-speaking frontier in the Waziristan tribal areas would risk tearing the country apart. It is also the case that Pakistan wants the Taliban as a bulwark against India. But it is misleading to separate Islamabad’s foreign policy objectives from the requirements of domestic cohesion, since irredentist agitation against India is part of the glue that holds together a fractious and fanatical collection of tribes.”

Drone attacks continue to be deadly, while their “effectiveness” is still dubious.

Holbrooke and Mullen had to go to India to assure them that they had things in check with Pakistan. 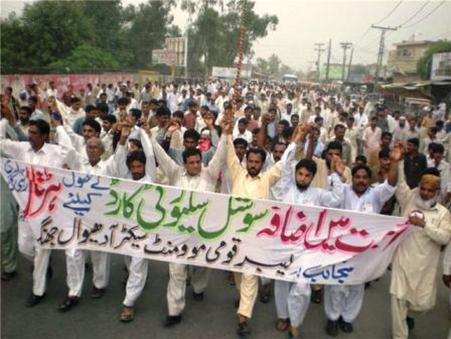 The textile workers’ strike in Faisalabad entered its seventh day. Here’s an inspiring report from Farooq Tariq of the Labour Party of Pakistan:

“The strike of power looms workers in Faisalabad enters the seventh day. All factories are closed. Today on 27th July, women workers demonstrated in front of the district administration office. They were demanding an end of police harassment and raids at their homes. They also spoke against the open exhibition of arms by the gangsters in the workers localities. The top police officials had to agree to the demands of the women and children who had refused to leave the place before their demands are met. Over 100,000 workers are on strike since 20th July and over 20,000 factories are closed completely.”

The strike is primarily over pay, as textile workers make less than $70 a month. If the Pakistani textile workers could link up with their Bangladeshi counterparts who are also out on strike, it could change the face of global fashion.

Additionally, unions are declaring a victory in the long fight against Coca-Cola.

Meanwhile, the debate about American aid to Pakistan is likely to heat up after the WikiLeaks announcement. The current aid package (which includes the construction of Reconstruction Opportunity Zones, or Pakistani maquiladoras) is stalled in Congress.